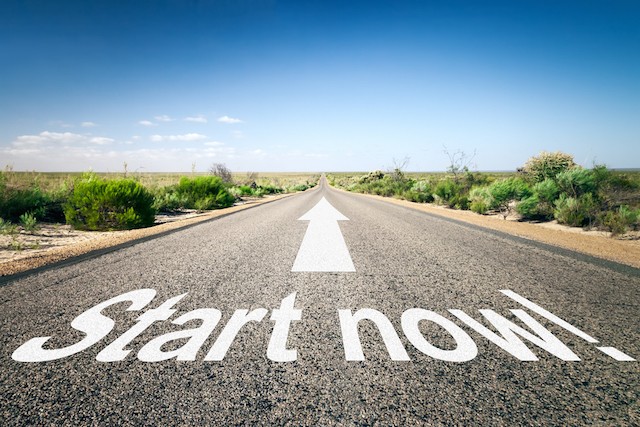 Many a time you ask someone: “What’s up with that business idea?” “When would you start that business?” or “there is an investment opportunity, are you joining?” He’ll respond with something like: “I am still thinking about it.”“soon…very soon we are going to do something about it” “when I get this or that figured out” “I’m thinking of doing this first; once I can get it done, then I’ll start” Truth be told, all these and several others are merely excuses – call it delay tactics. Sometimes we think more than is necessary. We at times over analyze till we get paralyzed. We wake with great dreams and we plan all day till the heat on the sun scorch the life out of it – stop thinking and start acting. You call yourself CEO, Chief EXECUTIVE officer not chief examination officer – start executing!

Start now; answer the questions later.  Act now, worry later. Fight now, count the score later. The information you now have is enough…it’s no problem getting more on the way – in fact, it’s just smarter. Many on their dead bed regret not most of what they did; but what they could do but did not. And now it’s almost impossible to get it done. Don’t be a fool: learn from others experience.

When we want to start business we ask so many questions and try to figure out so many things. It’s good to plan, analyze your options, and so on. As it is often said, look before you leap. But the truth is that we will never answer those questions conclusively. No matter the forecast and foresight, you certainly cannot completely tell what the future holds. So why not go ahead with the available answers (it will never appear enough) and get around future problems as they arise. Start now and think later. As they say: “when we get to the bridge, we’ll cross it.”

Stop all the ‘what ifs’…what if I fail? What if it doesn’t work out as though/planned? What if I’m wrong? What if I don’t have enough capital? How would you know the answer? How would you prove yourself right or wrong when the answer is in the doing, in the actual running of the business? No matter how sophisticated your business plan and/or feasibility study, you never can guarantee its success or failure until it is duly implemented. So stop asking will it work…Because, in fact, no one knows the answer for sure. The answer is hidden in the execution of the business plan. Stop asking what will I do when this …or that happens. The truth is: you don’t know! So go ahead and let the event happen…and watch out what you do. Stop asking what will I do if I run broke or bankrupt…there are several things that can be done with varying odds. In fact that number of things that you may possibly do in any future circumstance tends toward infinity. Why worry about a dead child when you are not even, at least pregnant? Get pregnant first, deliver the baby, then nurture with due diligence. That makes sense than crying over a dead unborn child….do you get the analogy?

Don’t let the future uncertainty prevent your present possibility. Yesterday is in the tomb; tomorrow is in the womb; today is a bomb, a timed bomb. If you act fast you get the best it has for you. Should you delay, you risk losing it and even getting burnt – or destroyed. You wouldn’t want that, do you? Every day is a bomb and you’re not sure how many you have in your kit – so, make each bomb count. Make each explode and with massive impact. Do not lose any without detonating it. Each new day we see, is being handed a new timed bomb…today, what would you do with yours – it keeps ticking.

You may not have everyone vote for it, all the facts may not be plain, may be all you’ve got is your gut instinct. There’s no harm in trial… go with your guts! Your instinct along with the available facts is enough, decide NOW! There will be never a better time. You have to make time – and the earlier the better. Don’t have another execute that plan while yours is still being analyzed unduly. Go with your guts.

In conclusion, yesterday is gone and you’re not promised tomorrow. Get rid of procrastination and act now. Now is the time acceptable….Don’t let fear and uncertainty hold you down. You are capable of great things – you’ll never know how much until you give it a trial. As they say, a trial will convince you. Give that idea a good try…ACT NOW, and think about it later.

This site uses Akismet to reduce spam. Learn how your comment data is processed.